Everything you wanted to know about #COP21 but were too embarrassed to ask.

The UN climate talks can be pretty baffling, with a complicated history and lots of jargon. So as the world gears up to the Paris COP21 talks in December, we have summarised some key points – including one essential topic that is not yet on the agenda: a moratorium on new coal mines.

UNFCCC stands for the ‘United Nations Framework Convention on Climate Change’, and is an international environment treaty negotiated in Rio de Janeiro in 1992. Almost every country is a ‘Party’ to the Convention. A UN Secretariat, also known as the UNFCCC, supporting the operation of the Convention and negotiations towards its goal. The Secretariat is currently lead by Christiana Figueres.

The objective of the treaty is ‘to stabilise greenhouse gas concentrations in the atmosphere at a level that would prevent dangerous anthropogenic interference with the climate system,’ i.e. to stabilise emissions to prevent climate change.

Other key elements are ‘common but differentiated responsibility’: countries most responsible for causing the problem, and those with the greatest financial capacity, were expected to take stronger action and earlier. There is also a commitment to ‘financing’: wealthy countries are expected to provide funds to less capable and more vulnerable countries to help them develop sustainable and adapt.

The Parties to the UNFCCC have met annually since 1995, in a meeting known as the ‘Conference of the Parties’ (COP) to assess global progress in dealing with climate change. The President of the COP is usually a Minister from the host country, and they have responsibility over how talks proceed.

At COPs, countries assess and negotiate global progress in dealing with climate change, including emissions reduction, monitoring and verification of emissions, ‘financing’, adaptation, technology transfer and a range of other topics. Informal conferences happen on the ‘sidelines’, which draw a wide range of groups.

Every COP is numbered. This year’s meeting in Paris is COP21. The talks have been going for two decades.

3/ What has happened at the COPs?

The history of the COPs is pretty complicated, but here’s a quick summary.

1997 - The Kyoto Protocol was developed at COP3, establishing legally binding obligations for developed countries to reduce greenhouse gas emissions. Countries signed and ratified the Protocol and it ‘entered into force’ in 2005.

2009 - At COP15 in Copenhagen, countries agreed to limit future global warming to below 2 degrees Celsius. This was agreed as the threshold for unacceptably dangerous climate change, and became a legal agreement at COP16 in Cancun. Many countries made emission reduction pledges, including for the first time developing countries -- either below business as usual, or reducing emissions intensity per unit of GDP.  Still, global pledges fell far short of the 2 degree target.

4/ What is Paris COP21 and why is it significant?

COP21 in Paris runs from 30 November to 11 December 2015. The objective of the 2015 conference is to achieve, for the first time in over 20 years of UN negotiations, a binding and universal agreement on climate, from all nations of the world.

There is some optimism going into COP21. Major emitters, such as the US, the EU and China, have all increased their ambition, while the cost of renewable energy is falling quickly and already competing with fossil fuels, especially when you consider the health and other impacts.

Even the UNFCCC concedes it seems unlikely the agreement will add up to 2 degrees. But a robust deal will serve as a platform for increasing ambition over time. This makes it important for the world to address any obstacles to ambition.

There are many issues on the table at COP21: which parts of the agreement will be legally binding, how it will interpret ‘common but differentiated responsibility’, the level and mechanisms of financing, plans for adaptation and the level of emissions ambition.

But one issue is currently missing: the plans to massively expand coal exports globally.

5/ What does Paris COP21 have to do with a global moratorium on new coal mines?

In short: if Australia succeeds in its plans to double its coal exports, the world’s plans to tackle global warming will fail. 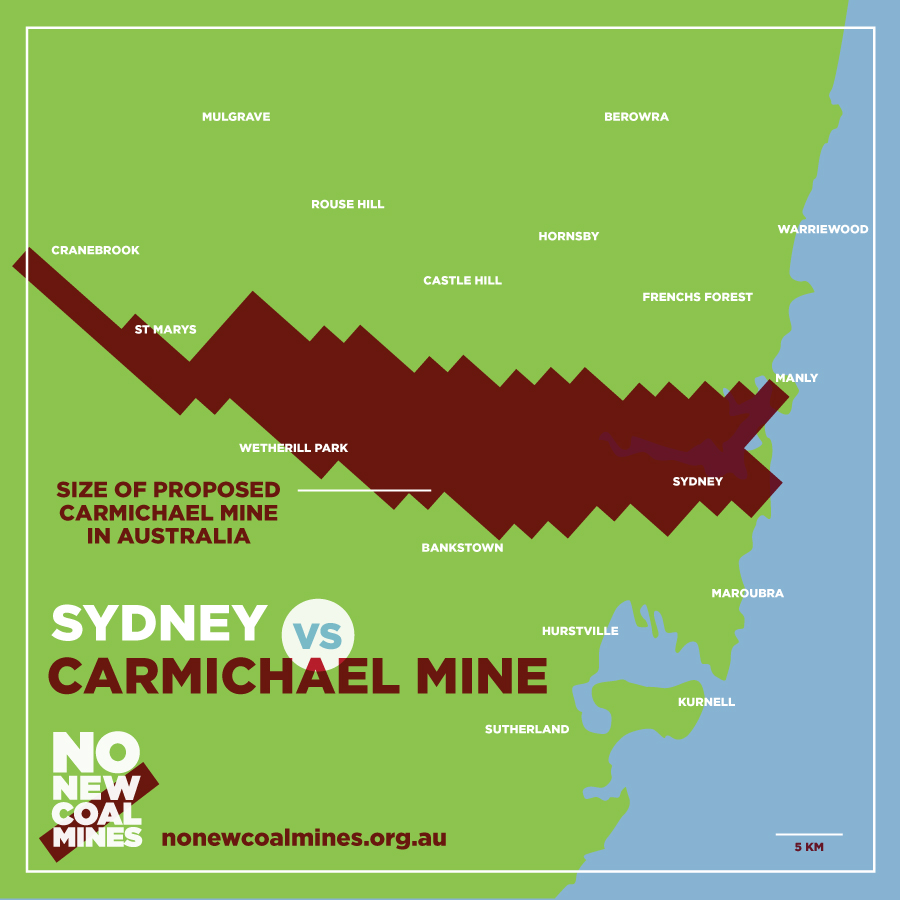 The official 2 degree target under the UNFCCC allows us to determine a ‘carbon budget’, the maximum we can emit if we are to hit 2 degrees. This makes it clear the vast majority of fossil fuels have to stay in the ground. 80% of the world’s coal, and 95% of Australia’s coal, must stay in the ground. This is now.

Since it started, the UNFCCC has focused on emissions but largely ignores extraction of fuel. But efforts to extract more fossil fuels make it harder to use less of them, as more supply pushes down prices, encouraging their consumption and investment locking in future consumption.

While countries negotiate reducing emissions, a small number of countries, such as Australia, are aiming to dig up and sell a lot more coal. This means lower prices, and current “(relatively) low coal prices are an important reason countries choose coal to satisfy their energy needs” making it harder to make progress. Yet this is not on the agenda at Paris.

That is why No New Coal Mines is urging French President Hollande to put coal exports on the agenda at the 2015 Paris talks, and to help the world’s governments negotiate a global moratorium on new coal mines.