9 eminent Swedes: Sweden should back coal mine moratorium

9 eminent Swedes call on the Swedish government to support a moratorium on new coal mines, as proposed by the President of Kiribati, in an article published today in a top Swedish news site. 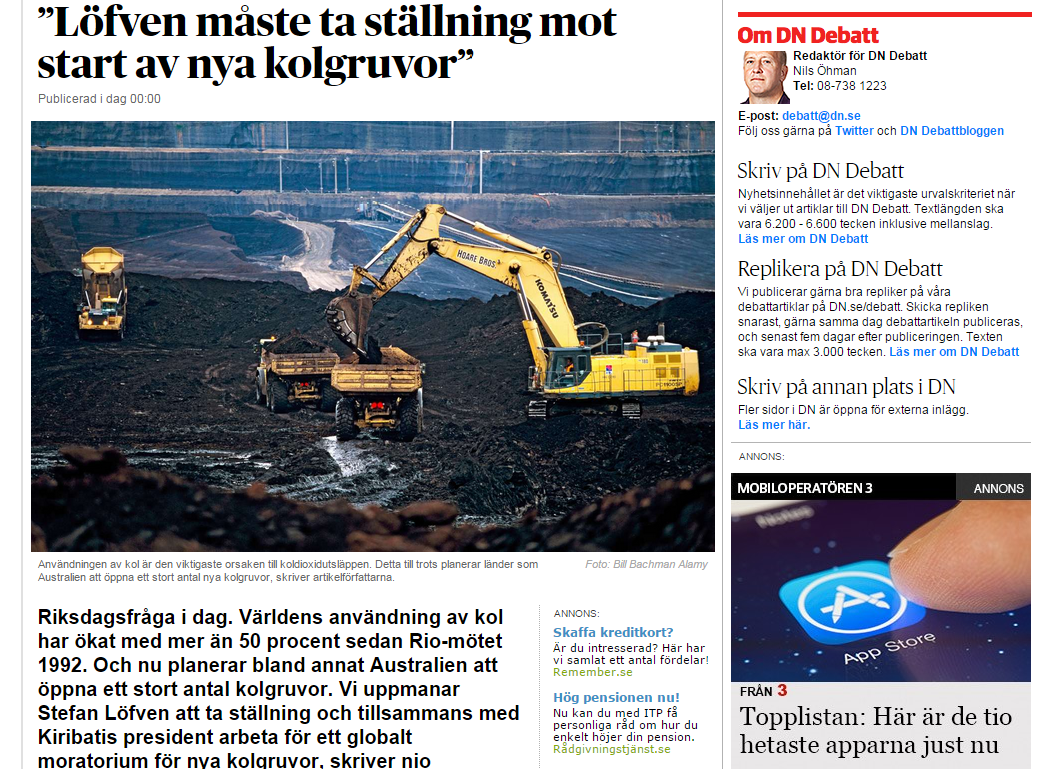 An opinion piece was published today in Dagens Nyheter, a top Swedish news site, co-signed by 9 eminent Swedes, calling on the Swedish government to support the call from the President of Kiribati for a moratorium on new coal mines. The piece is published as Swedish parliament debates climate change and the Swedish Left Party submits a formal question asking the Prime Minister if Sweden will take this important step. Read more about all of the latest from Sweden here.

The article, translated in English below, is co-published by

Parliamentary question today. World’s consumption of coal has risen by more than 50 percent since the Rio-meeting in 1992. Furthermore, Australia is planning to approve numerous new coal mines. We encourage Stefan Löfven to take a stand and together with the president of Kiribati work for a global moratorium on new coal mines.

President Anote Tong of the small Pacific nation Kiribati recently wrote a letter to Prime Minister Stefan Löfven and asked for help. As one of the lowest lying countries in the world, Kiribati is already suffering from the impacts of rising sea levels and more intense tropical storms that accompany climate change. The burning of coal is the most important cause of climate change. Countries such as Australia plan nonetheless to open a large amount of new coal mines.

It is in this context that President Tong has called on world leaders to adopt a moratorium (a ban) on new coal mines. To President Tong, the increased usage of coal threatens the existence of his country. The latest IPCC report supports Tong’s concerns and establishes that the world – to limit global warming to 2° - has to get close to zero emissions by 2050 at the latest. That makes the phasing out of coal an obvious priority.

The question of whether Sweden support a moratorium on new coal mines will be brought up during the climate policy debate in parliament today. We the undersigned support that call and ask Prime Minister Löfven to respond quickly and positively to president Tong. It is good that our government has committed to make Sweden a leader in combatting climate change. Prime Minister recently stated that: “Sweden will become one of the first fossil-free welfare states in the world.”

We know that our domestic actions are important, but they are not enough to protect the people of Kiribati. Climate change is a global issue and only by reducing the sources of greenhouse gas emissions in all parts of the world can we have a chance of avoiding a future where Kiribati is under water.

World governments are preparing for the climate meeting in Paris at the start of December. We expect our government to be prepared to lead. At the same time, we know that an agreement is only the first step. It has to be complemented by activities and decisions made by cities, businesses and civil society. An initiative with the stated goal to stop new coal mines from being built is one example of an activity that can be a complement that strengthens actions against climate change on the UN-level.

Since 1992, when world leaders first agreed to reduce emissions in Rio, the world’s production of coal has risen by more than 50 per cent (according to IEA). The purpose of the convention is to lower emissions. The fast expansion of coal is in that perspective a huge failure. Burning of coal releases almost twice as much carbon dioxide as the burning of oil.

We need creative solutions to limit global warming. New innovative technology is crucial. The fast development in renewable energy – and the technique to store electricity – is very positive. It gives developing countries good opportunities to avoid being stuck with a fossil-fuel economy, given that the industrialized countries help with capital for investments (which is usually larger than to invest in coal).

We have to work hard to create new types of cooperation. An agreement to ban the construction of new coal mines is the kind of simple and bold idea the world needs. The proposal is in line with the recent OECD decision to restrict export credits for coal-fired power plants.

The president of Kiribati has written to all of the world’s leaders asking them to join him in taking this big step. Eleven pacific nations have already joined his call. Prominent voices have also expressed their support, including Sir Nicholas Stern. In response to the call for a moratorium Stern declared that 'This is an important move, as the world must rapidly put an end to the burning of coal with the release of carbon dioxide into the atmosphere if it is to have any realistic chance of limiting the increase in global average temperature to no more than 2 degrees Celsius."

The government has stated its ambition to move beyond fossil fuels. The argument is that continuous use of fossil fuels inevitably leads to dangerous climate change. The situation is already dangerous for countries in the Pacific Ocean, resulting in a humanitarian disaster if these countries drown.

We encourage Stefan Löfven to, in the name of the people, take a stand and together with President Tong work for a global moratorium on new coal mines. The last thing our world needs is more coal mines. Sweden has a proud tradition of solidarity with the vulnerable. That tradition demands that we listen to the cry for help from the Pacific Ocean.