Energy Poverty: can coal save humanity?

Hundreds of millions of people around the world lack access to electricity and even more lack access clean energy sources. Energy poverty is a major health issue and an impediment to economic development.

But while the coal industry claims that coal is the answer, their arguments just don't stack up.

‘Energy poverty’ is the lack of access to modern energy services. The International Energy Agency says globally more than 1.3 billion people lack electricity and 2.6 billion lack clean cooking facilities, with many of these people in Sub-Saharan Africa and Asia. Very low access to energy, use of dirty or polluting fuels, and excessive time spent collecting biomass fuel, all impact negatively on well-being, health and economic development.

It's a massive problem, and it's great the coal industry wants to address it. Unfortunately, they've got pretty much the wrong idea about how to do this.

The coal industry wants us to believe that coal is essential to lifting people out of energy poverty. In Australia, massive new coal mines in the Galilee Basin have been justified as the way to bring hundreds of millions of Indians out of poverty.

But their argument really doesn't stack up.

First of all, the coal industry ignores the fact that coal is incredibly damaging to health, ecosystems and the climate. Local air pollution from coal causes huge health impacts, hundreds of thousands of deaths and hundreds of billions of dollars of damage every year. Coal also causes climate change, with serious global health, economic and environmental impacts. These impacts tend to hit the poor disproportionately, entrenching poverty.

Consider this. On climate grounds alone, coal is already causing far more damage than it is worth on world markets -- and this will only get worse. 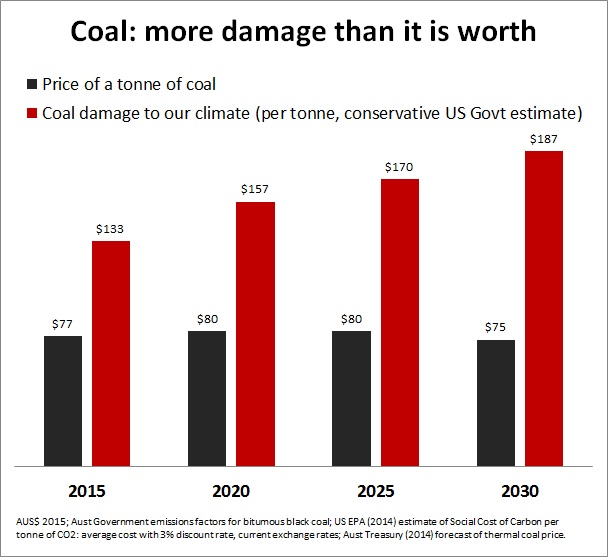 The above estimates are based on the notoriously low damages estimated by the US government and ignore local impacts like coal dust and smog. Including local impacts, the IMF estimates coal is subsidised by US$3.1 trillion a year in costs it imposes that it does not pay.

But even on narrow financial terms, coal isn't a great option for dealing with energy poverty.

The impacts, costs and alternatives lead the World Bank to now say clean energy is a better solution to poverty than coal.

Energy poverty is primarily a rural phenomenon. New grid connections to rural and remote areas are expensive, requiring extensive new transmission and distribution. Unlike with renewables, there is no small scale coal solution. What's more, the very poorest are least likely to be able to afford a grid connection and coal power even where it is available, or appliances to run on it, or in too many cases even a house to connect.

Together these factors help explain why new coal power doesn't go to the rural poor, who are not connected to the grid, but to the relatively wealthy with existing connections. The vast majority of new coal power installed in India over the last a decade has not gone to the rural poor. EAS Sarma, a former Secretary of the Indian Ministry of Power, wrote: "Coal is not the answer to India’s energy poverty… the benefits of adding new generation capacity accrued largely to the existing, affluent consumers. … What Indians need is affordable, locally-generated renewable energy, not coal."

In fact, when coal companies themselves deliver energy poverty programs, they do it with anything other than coal. The proponents of the Carmichael mine, Adani, donate solar street lights to villages in India. In a recent report, The Australia Institute could not find a single example of a coal company supporting an energy poverty alleviation project using coal-fired power. Coal industry public relations materials relating to energy poverty are just that – public relations spin. Peabody Energy claims its lobbying for coal is itself philanthropy! 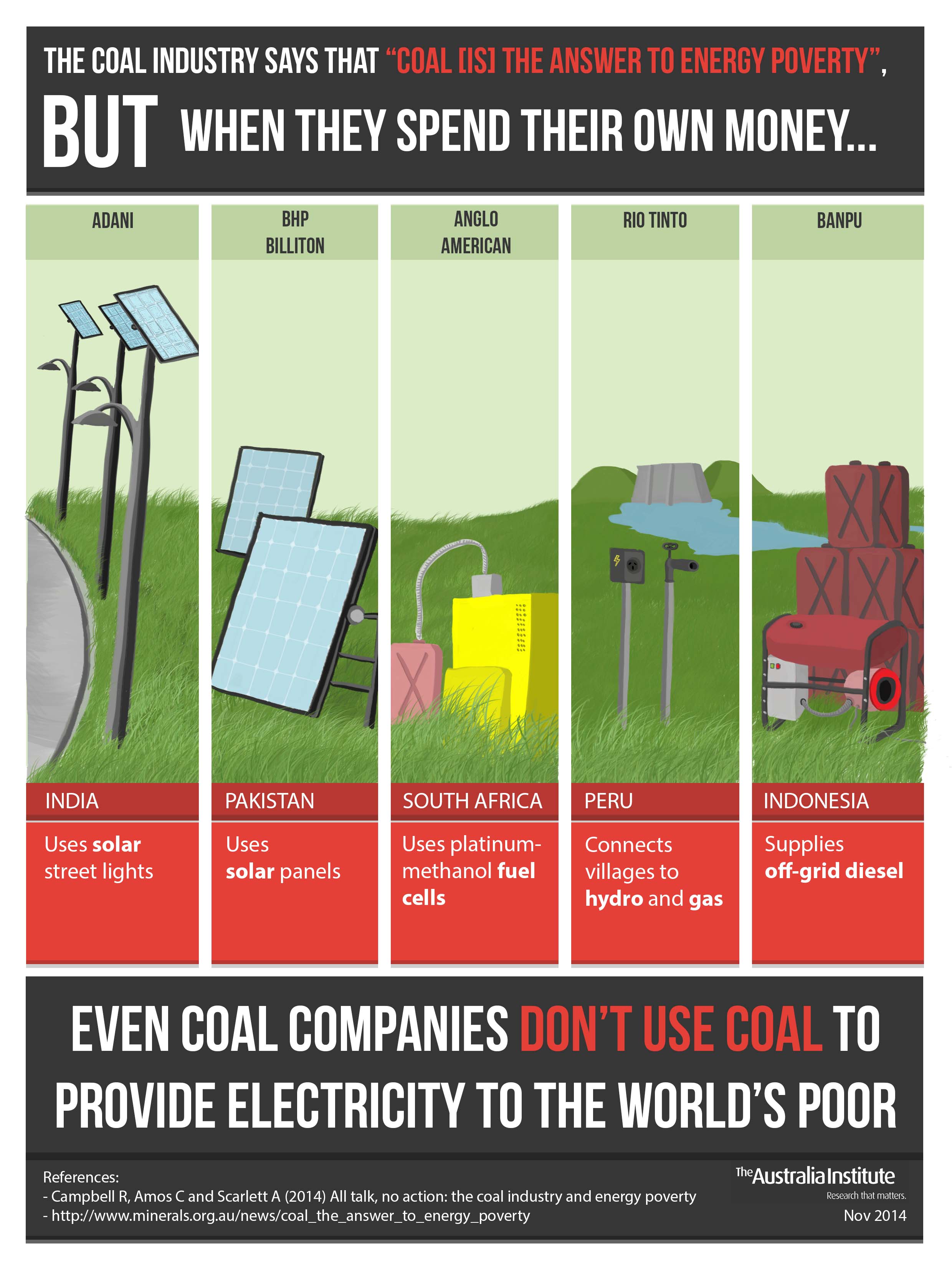 In fact, in many cases renewables are already more attractive for providing new electricity connections. It overcomes the need for high cost for grid-connection -- cost which increase with distance from the existing grid -- while the cost of renewables is falling and competing with coal, even for urban contexts.

Even in the International Energy Agency's 'Energy for All' scenario, providing modern energy to everyone by 2030, 70% of communities currently without connections get energy through micro-grids or stand alone solutions. The IEA sees "a PV capacity factor of 200 W per capita for 500 million people lacking other access to electricity." In other words, 500 million will use photovoltaics, not coal.

As outlined in a recent Oxfam report, distributed renewables have many other benefits. For example, they are quicker to install. more self-sufficient and secure. Renewables are also more readily scalable. For many, the right scale right now is very small. Access to lighting through solar lamps can be provided for just tens of dollars per household. Examples include the Indian-based social enterprise Pollinate Energy, which provide micro-financing for small solar lights, Project Light supported by Cargill. Again, the International Energy Agency considers such programs “invaluable”: "for the poorest communities, smaller solar technologies, such as solar lamps, can provide an invaluable initial step towards electricity access."

While coal will be a component of world electricity generation for some years, coal-fired power has little to contribute to alleviating energy poverty, and much to contribute towards causing poverty around the world.

So in short: no, building lots of new coal mines is not the solution for addressing energy poverty in the world.

For more information, read The Australia Institute's report – All Talk, No Action: The Coal Industry and Energy Poverty.