Launch of No New Coal Mines

Despite the fact that it is impossible to drastically reduce climate change while burning more coal, the Australian government insists that Australia's contribution to tackling climate change includes expediting the construction of enormous new coal mines in the Galilee Basin and the Hunter Valley.

The stated purpose of the Paris talks is stop global warming from exceeding 2 degrees Celsius. Australia says it will stand by its promise to do its fair share. It’s hard to see anyone taking us seriously.

In just two years, the Abbott government have:

Just this week, the government announced post-2020 emissions targets among the lowest in the developed world, despite Australia being among the dirtiest economies per capita. And to try to scare people into thinking stronger action will have disastrous consequences, they are now running an almighty scare campaign based on misrepresented modelling.

Before becoming Prime Minister, Tony Abbott described the argument around climate change as “absolute crap”. Now his government wants the world to believe them when they say they are serious about tackling climate change. We can think of a description for that.

Yet Australia’s biggest impact on global warming is not our emissions at home. It's the emissions we send abroad through our coal exports.

It was The Australia Institute's research in 1994 that showed Australia was the largest greenhouse gas emitter on a per capita basis.

That’s why The Australia Institute supports calls for a global moratorium on new coal mines. Our research shows that stopping new coal mines is the best way to tackle climate change and will impose the least harm in the broader economy.

A moratorium would be the strongest signal that the reign of coal is over. It would provide investment certainty and drive investment in cleaner sources of energy.

Coal barons say any mines Australia doesn’t build are mines the global market will ensure other countries build; to get around this dilemma, we need a global moratorium. (You can read more at our FAQ.)

The science is clear: we can't burn most fossil fuels and have any reasonable chance of staying under 2 degrees warming. This is now acknowledged by the Intergovernmental Panel on Climate Change, International Energy Agency, Bank of England, US President Obama, French President Hollande. We need to 'keep it in the ground'.

To meet stop warming from going past the 2 degree limit, we would have to leave 95% of Australia's coal in the ground. Yet Tony Abbott says he can see "few things more damaging" than the idea that coal "should be left in the ground and not sold."

Australia has a larger share of the seaborne coal market than Saudi Arabia has of the world oil market. Over the next 10 years our government and the coal industry plan to sell even more.

If it goes ahead, the Adani/ Carmichael mine in Queensland's Galilee Basin would gouge a scar 60km long into the earth, becoming Australia's biggest coal mine. The 2 billion tonnes of coal from Carmichael would make a road of coal a metre deep, ten metres wide, and 200,000 kilometres long. That road of coal could stretch around the world. Five times.

While the world prepares for a Paris deal to bring down global emissions, our government is trying to increase them, by selling more coal. Any deal reached at the Paris climate talks will be undermined by our planned thermal coal projects.

A bold voice from the Pacific

Everyone will be affected by the impacts of more coal mines, but Pacific Island states will be among the most vulnerable.

President Tong of Kiribati is acutely aware of this. He has seen it in his own lifetime.

That is why President Tong is writing to all world leaders, asking for their support in negotiating a moratorium.

If our government was truly concerned about taking climate action, they would help President Tong. We wish we believed this were possible. But calling on this government to help that would be a fool’s errand.

Our political establishment is locked in behind building more coal mines to sell more coal. They will never consider a global moratorium -- not without international pressure. So we need to call on those who can build that pressure. 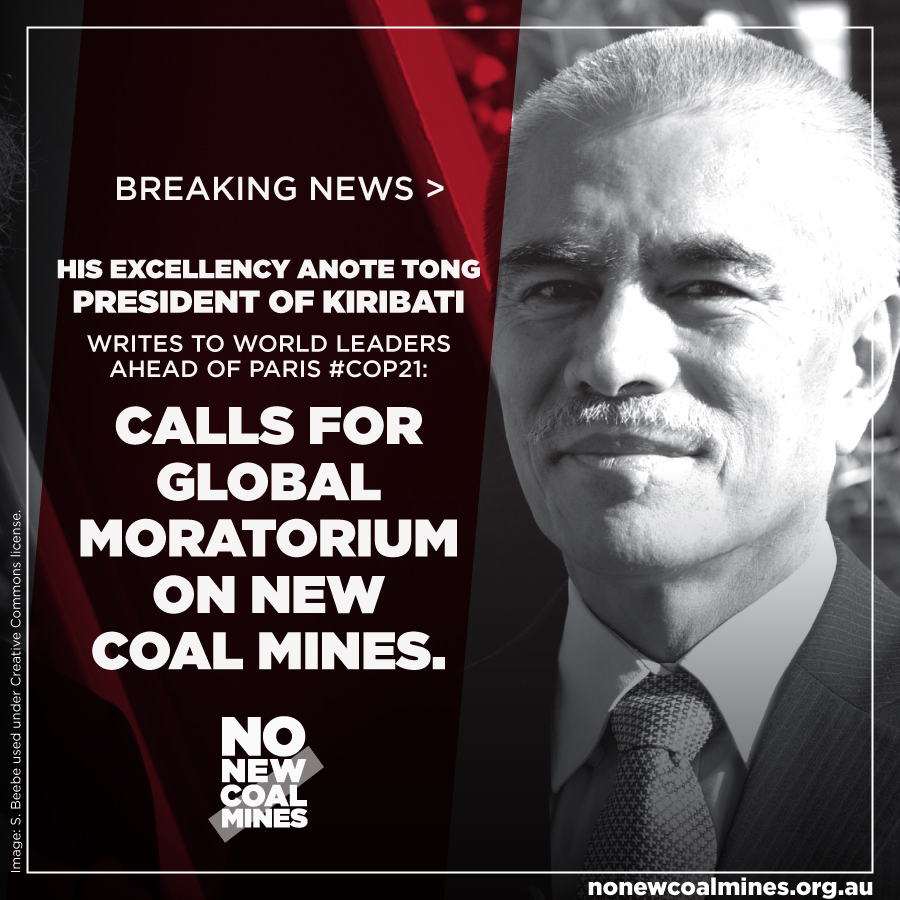 To the host of the Paris talks

As hosts of UN climate talks, France has considerable authority over what is discussed. France has put considerable diplomatic capital into building momentum for success. President Hollande knows success means leaving 80% of fossil fuel reserves in the ground.

So The Australia Institute is launching a petition to President Hollande. We are asking him to put a global moratorium on new coal mines on the agenda for the Paris talks in December.

While two decades of climate talks have focused on emissions targets, they have largely ignored the growing extraction and trade of fossil fuels. Any international agreement must ensure most coal stays in the ground. Negotiating a moratorium on new coal mines would be a simple but hugely significant step towards securing a safe climate.

An agreement to stop expansion of coal mining could make the Paris talks truly historic.