The movement for a global moratorium on new coal mines has found the backing of Pacific Island leaders. 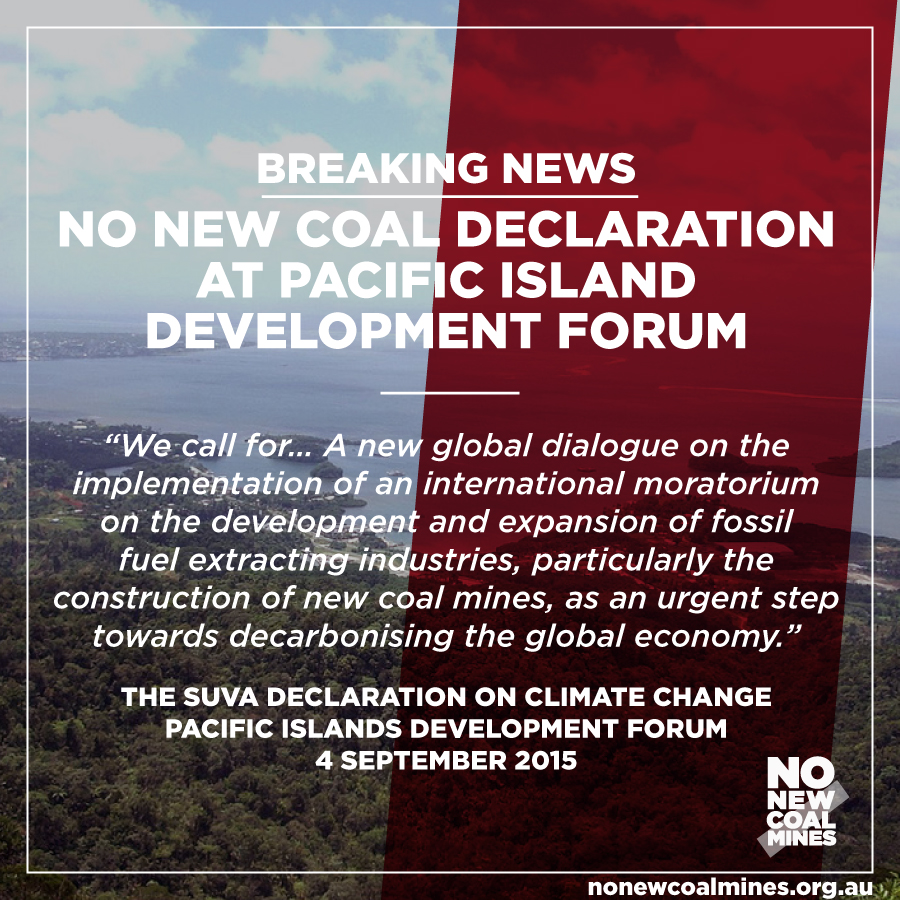 The Pacific Islands Development Forum Summit of Leaders (PIDF 3) in Suva, has signed the historic Suva Declaration on Climate Change, which includes a call for a global moratorium on new coal mines.

The historic declaration and the solidarity of Pacific Island nations ahead of world climate talks in Paris in December noted the ‘suffering of our people from the effects of climate change’. The declaration reads:

We, the Leaders of the Pacific Islands Development Forum;

6. Express grave concern that the continued increase in the production of fossil fuels, particularly the construction of new coal mines, undermines efforts to reduce global GHG emissions and the goal of decarbonising the global economy.

We therefore call for…

g. a new global dialogue on the implementation of an international moratorium on the development and expansion of fossil fuel extracting industries, particularly the construction of new coal mines, as an urgent step towards decarbonising the global economy.

“We go from here to Paris with a clear signal – in our Suva Declaration on Climate Change – of our determination to finally get the world community to act,” said Prime Minister of Fiji, the Honourable Josaia V Bainimarama.

“Our disappointment and frustration at the world’s failure to act runs through this entire document. We in the Pacific tend to speak softly. It is in our nature. But on this issue we needed to cry out with one voice, enough is enough. And we have. And it is all the more powerful for that.

“The Suva Declaration is destined to be an historic document of an historic moment in which the Pacific came together as one. And it caps a week in which successive speakers have warned of the extreme gravity of the challenge we face.”

The statement sends a clear message, ahead of Paris COP21: that the Pacific Islands demand concrete action on climate change.

Will you join the Pacific and the growing call for a global moratorium on new coal mines? > http://nonewcoalmines.org.au/take_action

Read the full text of Suva Declaration on Climate Change.