The NNCM movement is progressing in Sweden. On Wednesday, Swedish news paper interviewed Richard Denniss and on Thursday, Jonas Sjöstedt, the leader of the Left Party, asked Prime Minister Stefan Löfven if he would support Kiribati during question time in parliament. 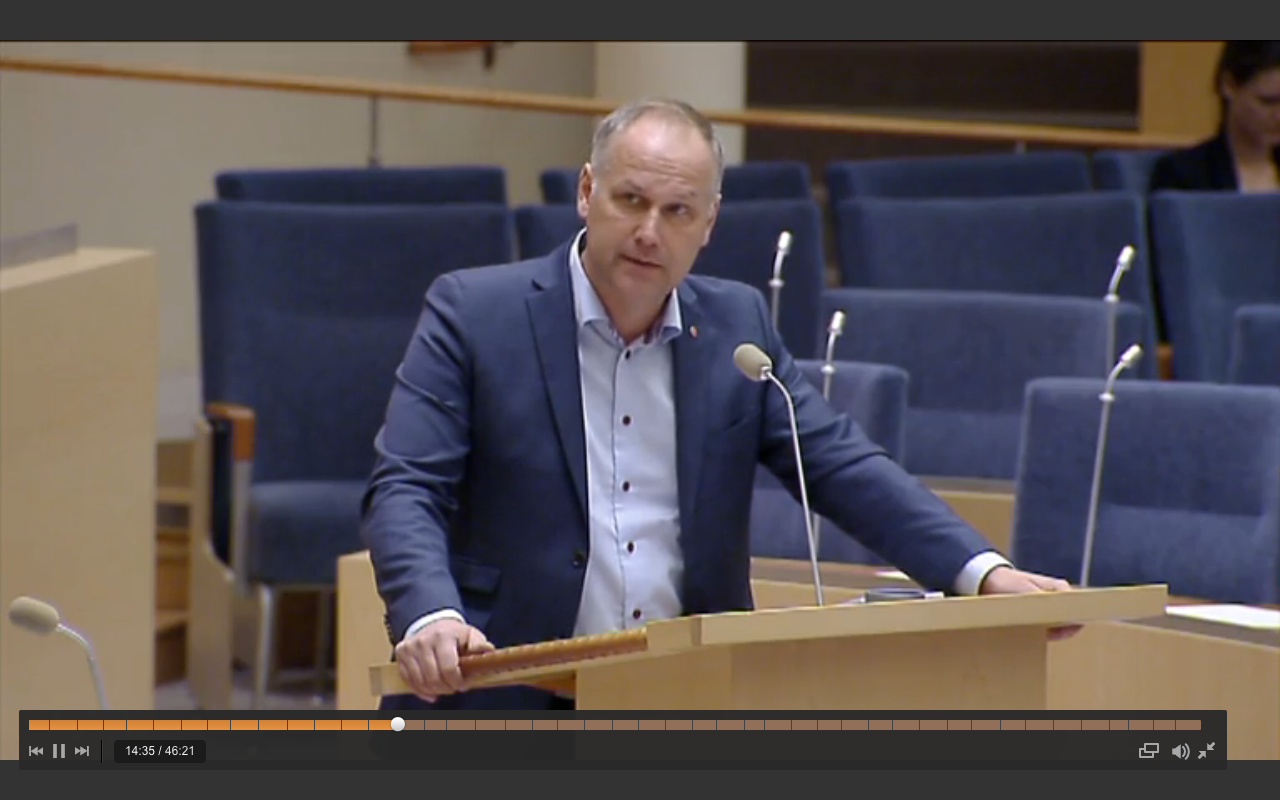 “Mr. Speaker. Prime Minister Löfven. On October 2nd you received a letter from president Anote Tong, the leader of Kiribati, an island nation in the Pacific Ocean. His country is about to disappear. It is one of many countries that because of climate change is about to go under. The entirety of Kiribati’s 100,00 people could become refugees together with the tens of millions of refugees there already is.

The president has asked other leaders, one of them being you Stefan Löfven. He wants us to promise each other that no more coal mines will be built, not a single one, for us to be able to avoid catastrophe. Many countries in the Pacific Ocean has already signed and promised this to President Tong.

I know that Stefan Löfven and Anote Tong will meet in Paris in the lead up to the climate meeting. My question is: Will Sweden, as the first European country to do so, sign on to this very reasonable initiative initated by Kiribati?”

The Prime Minister answered the question vaguely, first by stating the good dialogue he has had with island nations in the Pacific. He then continued by saying; 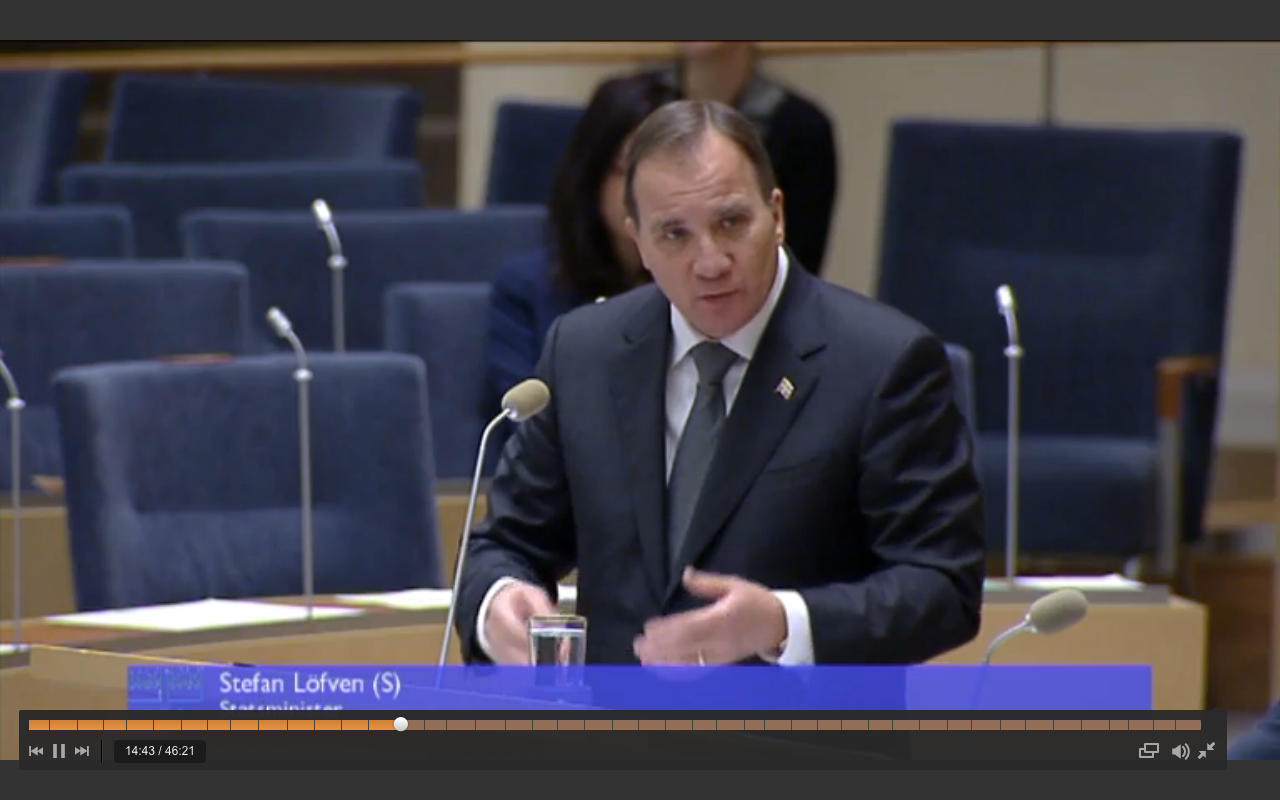 “The wide-ranging treaty [from COP21] has to be legally binding and make sure that we get as far below 2 degrees as ever possible. This means that everyone has to fulfil its commitments. That can be done in different ways. It is obvious that we cannot have any other ambition but to use as little fossil [fuels] as possible, but it has to be up to each country how to manage that.”

The Prime Minister rounded up his answer by once again stating the great cooperation he has with these island nations. Jonas Sjöstedt said that he shared the belief of taking strong action on climate change. He was unable however to understand why Sweden would not sign on to the initiative but highlighted that there is something else Sweden can do - take responsibility for the coal mines and resources owned by Vattenfall. Vattenfall is a company wholly owned by the Swedish government that is about to sell its coal mines and coal resources. The Prime Minister said that the responsibility for the sale belongs to Vattenfall’s board of directors.

It was disappointing to witness when the Prime Minister didn't give a clear answer. President Tong deserves it. Let us hope that they have a good discussion on Monday.

Swedish news paper Svenska Dagbladet (SvD) published an interview with The Australia Institute's Chief Economist Richard Denniss on Wednesday. The interview centered around No New Coal Mines and the reasons to why Sweden should and why they still might not support a moratorium.

The Pacific island nation of Kiribati is facing the threat of disappearing below the surface of the sea when the climate gets warmer. In a cry for help, President Anote Tong wrote a letter to all world leaders and asked them to join him in his call for a global moratorium on new coal mines – among them Sweden’s Stefan Löfven (S). Yet, so far, the government has been silent. 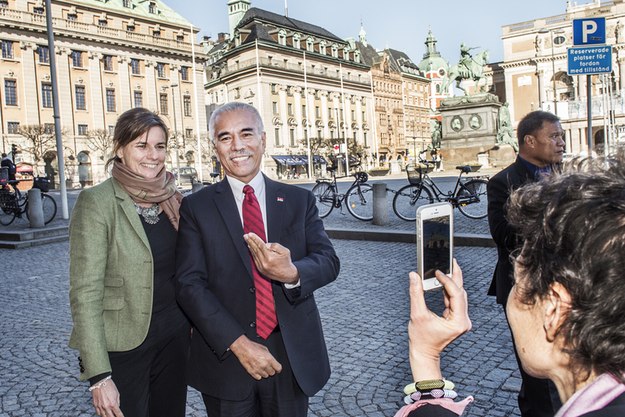 Anote Tong, president of Kiribati, visited Sweden March this year and was welcomed by the Minister for Foreign Aid, Isabella Lövin (MP), among others. Picture: Tomas Oneborg

World leaders will meet in Paris in only a couple of days with the straightforward task of limiting carbon emissions. In the lead up to the meeting, Anote Tong sent a letter to all world leaders, which pleads for a moratorium on new coal mines, a halt which could have a significant positive impact on the environment.

The worst contributor today to carbon emissions is coal– and still, more coal mines are being built all over the world.

Eleven Pacific island nations have signed on to the moratorium so far. The rest of the world however, remains silent.

- They all say that it is a great idea, but there are few that provide a clear answer. Small countries are easy to ignore, says Richard Denniss, Chief Economist at the think tank The Australia Institute, who has been in Europe since August trying to raise the issue.

His hope is that Sweden, with its tradition of taking climate change seriously, will give Kiribati a worthy response. Sweden would be the first rich country to do so.

Anote Tong visited Stockholm in March this year where he met with Stefan Löfven and Minister for Foreign Aid Isabella Lövin (MP). During the meeting, the President stressed his nation’s vulnerability to climate change.

The government has not issued a response to the letter so far – even though they should have received it in September.

He says that he has trouble understanding why S [the Labour Party] and MP [the Green Party] have not yet taken this matter further. One argument that he has heard from people within politics and science is that Sweden’s leadership is concerned about the sale of Vattenfall[‘s coal mines]:

- Let us be clear. If new coal mines are built, then countries such as Kiribati will sink. If Vattenfall is more important to Sweden then it is to help and protect an entire country – then I do understand why they won’t back the moratorium.

Minister for Environment and Climate, Åsa Romson (MP), was asked by Jens Holm, environmental spokesperson for V [the Left Party], about Sweden’s position on the moratorium during question time in parliament earlier this week.

The answer was that the letter is “currently being processed by the office of the cabinet.”

- I do of course recognize the broader question, if all coal resources in the world be mined then it would be a very, very difficult situation to manage the corresponding climate change at all, Romson said and ended by stating that it was not a viable scenario.

The same answer – that the issue is being processed - is given by Erik Nises, press secretary. Stefan Löfven will be in Paris during the first day of the climate meeting where he will hold a speech before SIDS, or Small Island Developing States, of which Kiribati is a member.

“The Prime Minister will meet with the president in Paris, they will probably get the opportunity to discuss the letter then”, Nises writes in a text to SvD.

The call for a moratorium on new coal mines has found support from prominent figures, such as economist Nicholas Stern and author Naomi Klein. Renowned Swedes such as Arch bishop Antje Jackelén and Professor Johan Rockström have also indicated their support for Kiribati.

- To support a moratorium is a cheap way to show support and solidarity with a country that is standing at the frontline of climate change.