The incredible vastness of just one Aussie coal mine

The Australian coal boom is so big it's hard to fathom. The output from Adani's Carmichael mine, just one mine, would be enough to build a road of coal around the world -- 5 times and more than half again. It would give every Aussie household a double garage full of coal. It would cut a scar the size of most capital cities. It would blow 0.5% of the world's carbon budget.

That's just one of more than 60 major projects hoping to dump even more coal onto world markets...

Rapid growth has made Australia one of the world’s biggest exporters. Australia’s production is already 7.1% of world coal production. Yet Australian governments and multinational companies plan to double our coal exports, at a time when the world is gearing up to reduce global emissions. Someone has to lose. 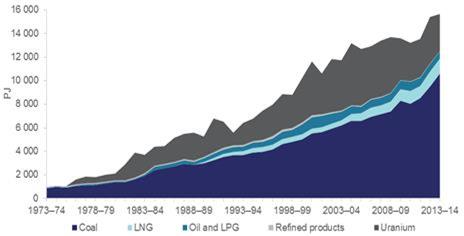 There are over 60 “major” new coal projects in various stages of development and approval around Australia, which together bring on more than 400 million tonnes of capacity. To put that in context, in 2013-14 Australia exported a total of 375 million tonnes of coal.

The epicentre of the coal boom is Queensland’s Galilee Basin. Bigger than the United Kingdom or the Australian state of Victoria, the Galilee Basin contains nine export thermal coal ‘mega mine’ proposals.

Running at capacity, the Galilee Basin mines would produce 330 million tonnes per year for export. That is equivalent to Australia’s current coal exports and almost one and half times Australia’s direct emissions. Many of these mines are now approved.

The biggest Galilee proposal is the Carmichael Mine. The mine would be the biggest in Australia and one of the biggest in the world. The project includes six open cut and five underground mine pits, together 40 kilometres long and 270 square kilometres in area within an even larger mine site. That’s as big as many capital cities. The broader industrial area taken up by the project is almost twice as big. 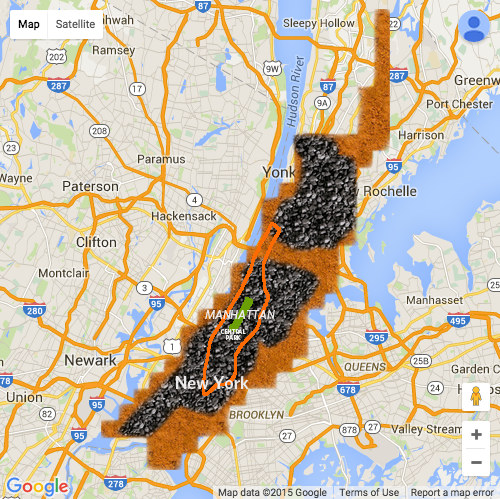 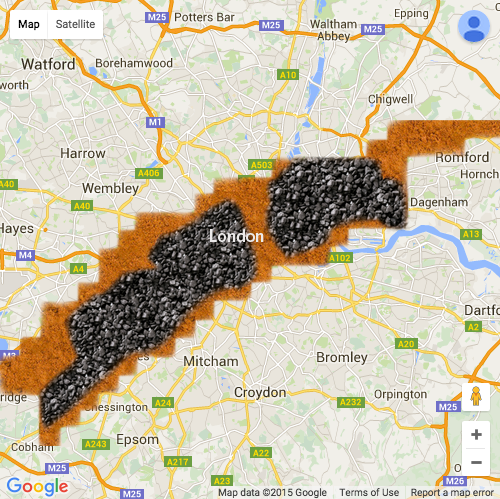 [Above: Size of Carmichael Mine site and pits, overlay on New York City (top) and London (bottom)]

To put this in context, 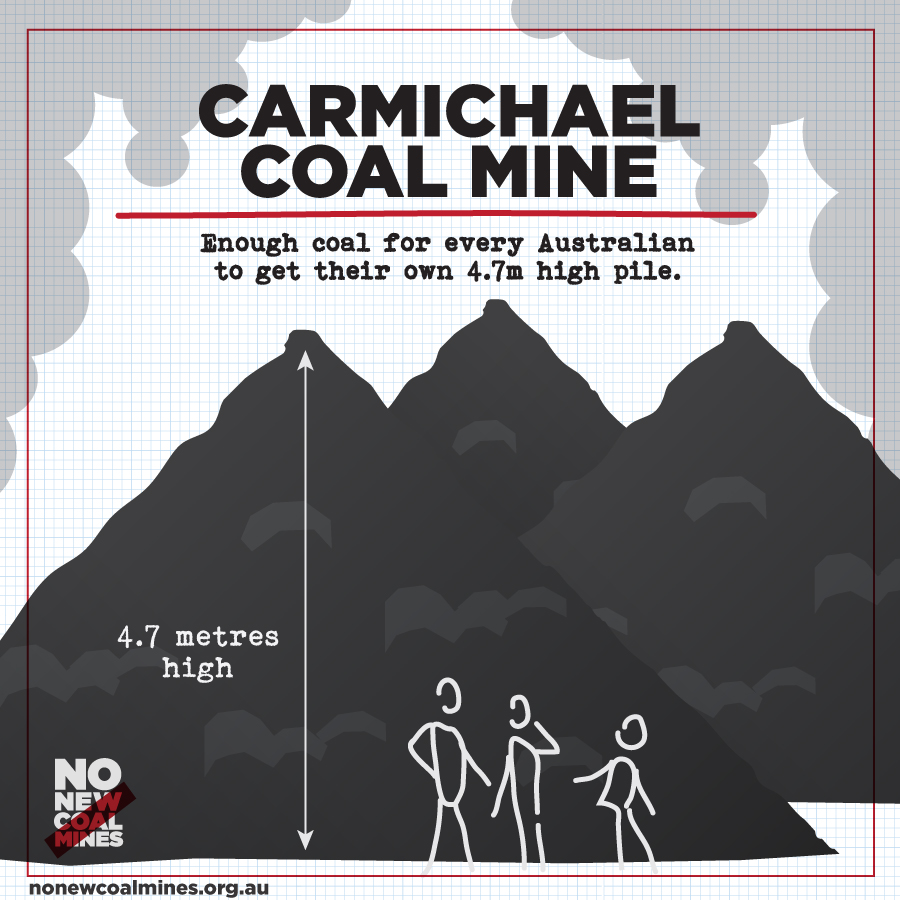 Lots of coal means lots of carbon dioxide and lots of climate change. Over its lifetime, the mine will be produce 4.7 billion tonnes of CO2. In court, Adani’s experts agreed this is “approximately 0.53-0.56% of the carbon budget that remains after 2015 to have a likely chance of not exceeding 2 degrees warming.” This includes operational emissions from the mine site (around 1.4 million tonnes of CO2 a year) but the vast majority comes from burning the coal.

If the mine were a country, the emissions from burning the mine’s coal would far exceed emissions from countries. In fact, running at peak capacity, the coal would produce north of 115 million tonnes of CO2 a year [1], making it the 36th highest emitter of CO2 in the world ahead of Kuwait, Chile, Philippines, Sweden, Greece, Norway, or New Zealand, and just under Pakistan and Iraq.

The Galilee Basin coal projects are hundreds of kilometres inland. To get the coal to international markets, it needs to be transported along rail lines, which are yet to be built, and exported from the Abbot Point Coal Terminal, which needs to be expanded, and shipped in hundreds of boats out through the Great Barrier Reef.

The infrastructure Adani needs to build is all incredibly expensive. High costs, colliding with a low coal price, have lead many analysts to call the project unviable. Australia’s coal boosting governments have responded with creative ways to subsidise the infrastructure, from concessions on royalties to loans dedicated to projects that are not commercially viable. If Adani can build the infrastructure necessary to get Carmichael operating, it’ll be easier to open up the rest of the Basin.

Carmichael is just one of three mega mines and six other mine projects in the Galilee. The 330 million tonnes of coal to be exported each year from the Galilee would produce at least 627 million tonnes of CO2. That puts it in at world emitter number 7, between Germany and South Korea.

The Galilee is just the biggest part of the ongoing Australian coal boom. In NSW the boom centres on the Hunter Valley, where most of the coal goes to market through the City of Newcastle, home to one of the world’s largest coal ports. In 2014 Newcastle Port exported 159 million tonnes of coal. The planned Terminal 4 expansion would increase capacity by a further 70 million tonnes a year, with the prospect of expanding to 120.

In the short term, it may be the bankers that impose a moratorium, at least temporarily. Swiss bank giant UBS says “no new coal mines needed” in the 5 year horizon. Analysts have long doubted the Carmichael mine is viable. But Australia’s governments appear set on boosting coal mining whatever the costs, despite the fact that even in QLD, mining is just 1% of employment and only 3% of government revenue.

Will the new Prime Minister Malcolm Turnbull follow through with threats of pouring public money into the Carmichael mega mine project? Will he ensure every Australian gets their garage full of coal – and ensure the world faces the worst of climate change?

[1] This is using the emissions factors cited by Adani’s witnesses in QLD’s Land Court, which is the factor for lower quality ‘sub-bitumous’ black coal.