Pacific Island states are extremely vulnerable to the impact of new coal mines. President Tong of Kiribati is acutely aware of this. He has seen it in his own lifetime.

A BOLD VOICE FROM THE PACIFIC

His Excellency President Tong is writing to all world leaders, asking for their support in negotiating a global moratorium on new coal mines. 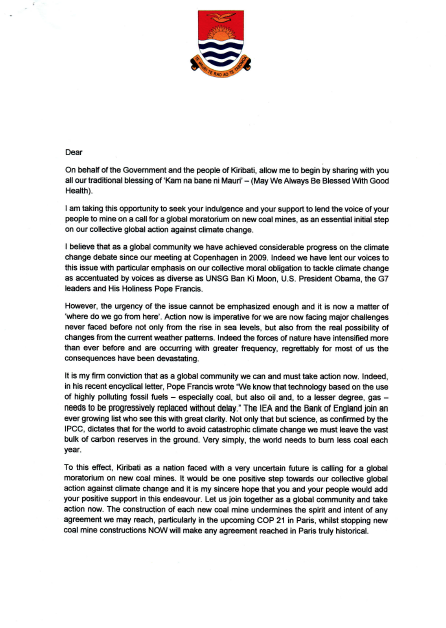 Here is the full text of the letter:

"One behalf of the Government and the people of Kiribati, allow me to begin by sharing with you all our traditional blessing of 'Kam na bane ni Mauri' - (May We Always Be Blessed With Good Health).

I am taking this opportunity to seek your indulgence and your support to lend the voice of your people to mine on a call for a global moratorium on new coal mines, as an essential intitial step on our collective global action against climate change.

I believe that as a global community we have achieved considerable progress on the climate change debate since our meeting at Copenhagen in 2009. Indeed we have lent our voices to this issue with particular emphasis on our collective moral obligation to tackle climate change as accentuated by voices as diverse as UNSG Ban Ki Moon, U.S. President Obama, the G7 leaders and His Holiness Pope Francis.

However, the urgency of the issue cannot be emphasized enough and it is now a matter of 'where do we go from here'. Action now is imperative for we are now facing major challenges never faced before not only from the rise in sea levels, but also from the real possibility of changes from the current weather patterns. Indeed the forces of nature have intensified more than ever before and are occurring with greater frequency, regrettably for most of us the consequences have been devastating.

It is my firm conviction that as a global community we can and must take action now. Indeed, in his recent encyclical letter, Pope Francis wrote 'We know that technology based on the use of highly polluting fossil fuels - especially coal, but also oil and, to a lesser degree, gas - needs to be progressively replaced without delay." The IEA and the Bank of England join an ever growing list who see this with great clarity. Not only that but science, as confirmed by the IPCC, dictates that for the world to avoid catastrophic climate change we must leave the vast bulk of carbon reserves in the ground. Very simply, the world needs to burn less coal each year.

To this effect, Kiribati as a nation faced with a very uncertain future is calling for a global moratorium on new coal mines. It would be one positive step towards our collective global action against climate change and it is my sincere hope that you and your people would add your positive support in this endeavour. Let us join together as a global community and take action now. The construction of each new coal mine undermines the spirit and intent of any agreement we may reach, particularly in the upcoming COP 21 in Paris, whilst stopping new coal mine constructions NOW will make any agreement reached in Paris truly historical.

As leaders, we have a moral obligation to ensure that the future of our children, our grandchildren and their grandchildren is safe and secure. For their sake, I urge you to support this call for a moratorium on new coal mines and coal mine expansions."

President of the Republic of Kiribati

Support President Tong's call for a global moratorium on new coal; add your name to the petition. 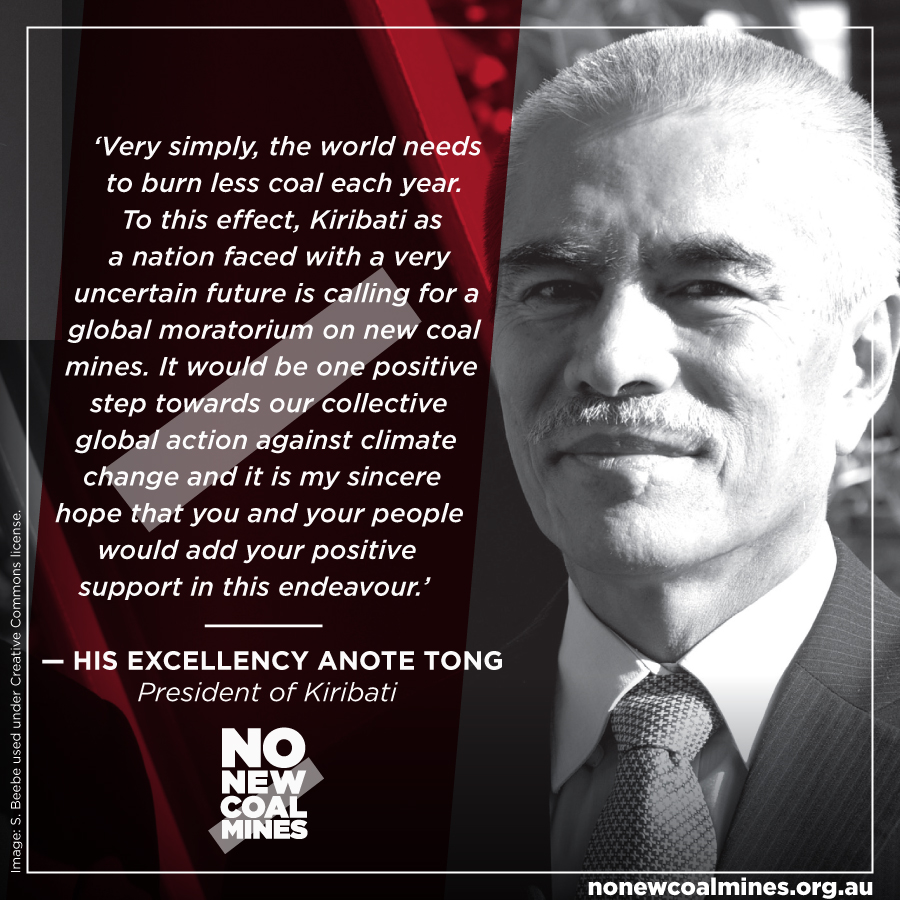